I thought, "Now wait a minute, what is going on here. Little Jennifer can play bar chords with ease and Big Dennis can't.

What does Little Jennifer know that Big Dennis doesn't? She had little strength in her left hand.


To hold down a bar, you pull the guitar lightly against your chest with both arms. No, you aren't going to pull as hard as you can--just enough to hold the bar. You will not harm or affect your guitar in any way! 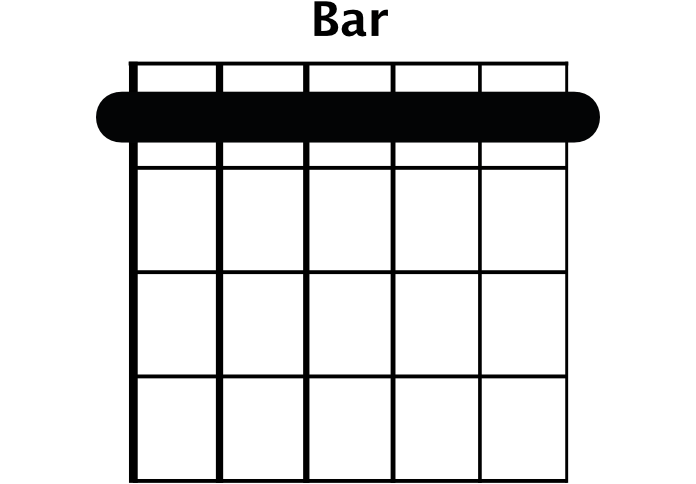 But don't practice this concept by holding a full bar all by itself. Keep reading, and see below how to practice. Those thumb muscles are relatively weak and get fatigued fairly quickly. But the arm muscles are strong even in a little child and once developed will not tire easily. The thumb is just there to stabilize the left hand and channel or direct the brute strength of the arms to the hand and fingers.

Once again, you use your arm strength to hold the bar. Pull the guitar lightly against your chest by pulling with both arms. You will feel the guitar digging very lightly into your chest. Again, you will not harm your guitar in any way--pull firmly, just enough to hold the strings down with your bar, NOT with all your might! Big Dennis tried to man-handle the instrument and in squeezing with his thumb, made matters worse, because squeezing with the thumb tends to make the barring finger arch up or bend instead of remaining flat across the neck, not to mention soreness and fatigue in the thumb.

Little Jennifer knew intuitively to just use her arm strength. In fact, it is a great idea to practice bar chords without the thumb on the neck at all! Keep reading, see below. A second oftentimes overlooked factor in bar technique, is that when playing a full bar, the back knuckle or joint of the first finger the joint closest to the wrist must be "up".

I am assuming your guitar is in good adjustment and that you are using strings of a reasonable tension using Hannabach or Aranjuez high tension strings when learning bar chords is not a good idea--they are much higher tension than other brands--but they are excellent strings. Set your 3rd finger on the fifth string at the 5th fret.

Set your 4th finger little finger on the fourth string at the 5th fret. Set your 2nd finger on the third string at the 4th fret. Be certain that 2nd finger is parallel with the fret and perpendicular to the fretboard, not slanting or falling over to the left. Also make certain that your thumb is in the middle of the neck, opposite the 3rd or 4th fret and fairly perpendicular to the neck and perhaps rolling over a little bit onto its left side. Now set the 1st finger across all six strings the bar at the 3rd fret making sure the back knuckle or joint is up, even with or slightly higher than the tip of the finger.

Yes, you are holding a full G major bar chord at the third fret. I recommend the third fret because the string tension for the bar is less at the third fret than at the first fret close to the nut. Now pull not with all your might, you don't need a lot of power the guitar against your chest with both arms.

It should sound real clear. If it doesn't, play each string separately to see which string or strings are buzzing. Sometimes it's not the bar at all that is buzzing but one of the other fingers! That's good news because you just press a little harder with those fingers or adjust their position slightly and all is well.

Also, you may need to slightly adjust where the tip of the bar finger falls--whether squarely on the 6th string, or perhaps a little past it to keep other strings out of soft spots or crevices of the finger. Results 1 to 4 of 4. Thread: Problem: putting 4 more complicated chords in 1 bar? Join Date Sep Posts 5.


Problem: putting 4 more complicated chords in 1 bar? How can I do that without overwriting the chords with the next chord or the end-sign of the bar " "? Regards, grinsor. Join Date Dec Posts In the Chords menu there's a button lower left with an "S" on it that will make a chord smaller width-wise as well as all following chords until you use it again to enter an "N.

They are considered notoriously hard to play for beginners due to the pressing of more than one string with a single finger. The term barre comes from the method of using the index finger to form a rigid "bar" across all of the strings. Barre chords are typically used when a performer wishes to voice a chord in higher positions on the guitar.

Choice of key may result in using barre chords as the more basic open chord fingerings of the first position of a standard-tuned guitar are not available for use in the chosen key. The two most commonly barred notes are variations of fingering shapes that are used to play the chords A and E on first, or open, position. The "E" type barre chord is made of an E chord shape moved up and down the frets and being barred, transposing the chord. For example, the E chord barred one fret up becomes an F chord The "A" type barre chord, occasionally called the "double barre", is made by sliding the A chord shape X up and down the frets.

When the A chord is barred, the index finger lies across the top five strings, touching the 6th string E to deaden it. Either the ring or little finger is then barred across the 2nd B , 3rd G , and 4th D strings two frets down, or one finger frets each string. For instance, if barred at the second fret, the A chord becomes B X Sometimes the highest note in a double barre chord is left out.

Most variations of these two chords can be barred: dominant 7ths, minors, minor 7ths, etc. Minor barre chords are made by inclusion of a minor third in the chord rather than the major third in "E" and "A" shaped barre chords, this note happens to be the highest 'non-barred' note. The above shows D major in open "C" shape form and A major in open "G" shape form. In the example above, the "C" shape offers an alternative voicing to the open D major and to the "A" shaped D major in fifth position. Variations of the basic major and minor triad chords can also be formed using the barred chord as their foundation.

For example, the open Cadd9 shape can be used in its C shape barre form up the guitar neck, as desired. This acronym is often used as a shorthand way of describing the use of barre chords that can be played anywhere on the fret board as described above.

It is often used by guitar instructors as a way to remind students of the open chords that can be used as barre chords across the fret board. By replacing the nut with a full barre, the chord shapes for C, A, G, E and D may be used anywhere on the fret board to play any major chord in any key.